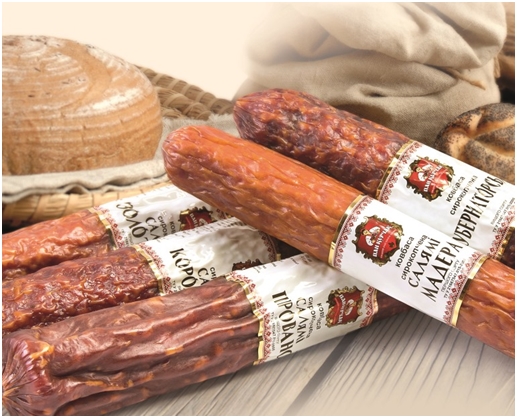 According to the results of surveys of connoisseurs of sausages in July 2015, the leader in sales among smoked sausages of TM Mr. Kurchak became – SALAMI “MADERA”!

What is the advantage of this “meat champion”? She owes her leadership to a unique recipe that historically originates from the distant islands of Madeira, the birthplace of the famous footballer Cristiano Ronaldo.

What is the history of the recipe for smoked salami “Madeira” salami?

In the picturesque expanses of the archipelago of the Mediterranean islands, invented a recipe for raw smoked sausage “Madera”. The temperamental Portuguese, inspired by the seductive aroma of the original wine of the same name, created a real work of sausage art – a unique tender salami with a tart spice. Very quickly, this salami found its fans around the world.

It is historically known that….

Рія .the history of creation of salami dates back to ancient Italian settlements. Confirmed the fact that in the destroyed in 2,000 BC. in the city of Salami, Greece, a description of a recipe for cured sausage was found. Hungary also claims the title of homeland of salami. However, the historical truth belongs to the inhabitants of the Apennine Peninsula – the Italians.

What is valuable in the exquisite “Madeira”?

The salami, named after the cozy islands, includes selected lean pork and lard of the highest quality, exclusively the backbone of the carcass, and tender chicken fillets. All raw materials come into production exclusively from reliable producers who carry out their activities on the principle of environmentally friendly production. The aristocratic composition of exotic spices adds spicy notes to the taste of Madeira salami.

An interesting fact that…

… Absolute benefits for the body are only those varieties of sausages whose caloric content does not exceed 580 kcal, and the amount of fat per 100 g of product reaches 56%, protein – from 13 to 30% (this is the content of nutrients in salami “Madera”)

Even from the Portuguese coast we have a tradition of paying special attention to the heat treatment of “Madeira”. At the first stage, carefully prepared minced meat is formed into loaves, which are thinner in diameter than the classic members of the sausage family salami. For a long time, they are dried in special chambers, because proper aging is a prerequisite for the quality of “Madeira”: both wine, under this name, and sausages. In order to preserve the well-known spicy delicacy of salami and not to disrupt the special interaction of all ingredients, Madera is only cold-smoked at the lowest possible temperature. Thanks to the chosen method of heat treatment, the delicacy, respected by all, retains its original slightly pink color and light texture.

… Steppe nomads in Asia also loved sausage and cooked it according to their own recipe. They took pork and horse as a basis and did not smoke it, but dried it in the sun, where the sausage was dehydrated and stored for a long time. Sausage was an indispensable product during military campaigns. They called this delicacy – “sudzhuk”. It was kept under the rider’s saddle. It was there that the sausages acquired the desired flat shape.

Therefore, it is the smoked sausage made of Madeira salami – the most useful and tastiest sausage in Volyn!