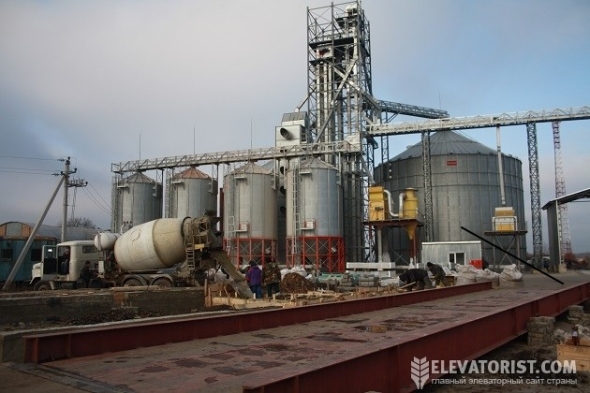 Project “AgroExpedition. Elevators 2014 ”from ELEVATORIST.com includes trips to elevators, acquaintance with new objects that are actively put into operation and communication with the guru of the elevator industry. Meanwhile, the authors of the project called the trip to the modern granary of Pan Kurchak in the village of Charukiv “A small cog in a large mechanism.”

Almost all elevator equipment in the complex was purchased from the Turkish company Mysilo. Volodymyr Makater, head of the Nesvich elevator, says he is satisfied with the equipment. The only nuance that made him nervous was the quality of the installation work.

Productivity of the transport equipment of this elevator is 150 t / h. Silo-type elevators have a capacity of simultaneous storage of 25 thousand tons.

“We thought that using straw was three times cheaper than using gas. We dried rapeseed, wheat and corn in these grain dryers, ”says the head of the elevator.

TORNUM representative Vitaliy Fitsyk was immediately interested in the efficiency of the grain dryer on alternative fuel. Answering his questions about fuel consumption, Volodymyr Makater said that one ton of corn requires up to a hundred kilograms of straw, if rapeseed, then 44 kg/t, wheat – 35 kg/t.

But there are small disadvantages in the operation of the grain dryer on straw. It needs to be stopped and cleaned every day, which, according to the elevator director, takes almost 4 hours a day.

According to Serhiy Horlach, Chairman of the Supervisory Board of Pan Kurchak, this year’s yield was good, so the elevator is fully loaded.

“Next year we will increase storage capacity to 52 thousand tons,” – shared his plans Sergei Alexandrovich.

He stressed that the elevators in their company, unlike others, are no longer designed for “transshipment”, but to service their businesses. This is how the company grows, slaughters and sells chicken meat, so the elevators store grain, which is usually used for compound feed.

“Elevators in the business model of our group are the first link that ensures the appropriate level of competitiveness in the difficult market of poultry meat production,” said Serhiy Horlach.

He also noted that today they have the opportunity to take loans for the construction of new facilities. Credit Agricole Bank helps a lot in this. With their support, it is possible to increase storage capacity and thus protect the business from the risks associated with other people’s elevators.