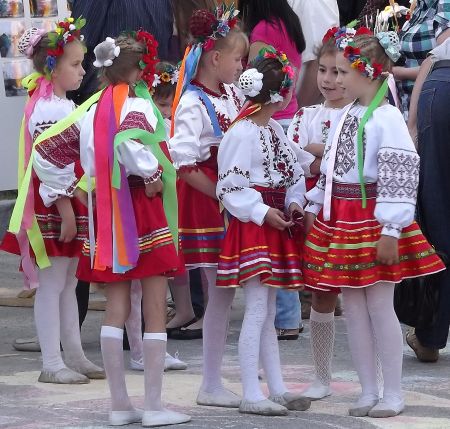 According to an ancient tradition, which has already developed historically, on the bright holiday of the Ascension of Christ, the people of Gorokhiv celebrate the Day of their city. This year, Agropromgroup “Pan Kurchak” agreed to help them in this, the leadership of which, led by Serhiy Martyniak, did not hesitate to respond to the request of the city authorities to assist in the celebration.

The celebrations on this occasion began with a liturgy in the Holy Ascension Church, where the liturgy was performed by Bishop Mykhailo of Lutsk and Volyn. After that, a procession took place in the city.

In general, on this day the festive program for the people of Gorokhiv seemed very rich and varied.

A football tournament was held at the local Kolos Stadium, the main initiator of which was the mayor, and the official sponsor was APG “Pan Kurchak”. Representatives of the town of Gorokhov and three other surrounding villages came together in an uncompromising sports fight. The winner of the football battles was the city team of Gorokhov, which in the final, with a score of 4: 1 defeated the team from the village of Skobelky. The winners and participants of the tournament were awarded by Gorokhiv Mayor Viktor Godyk and a representative of the Agropromgroup “Pan Kurchak” Mykola Makivka, who presented all teams with diplomas and a set of footballs.

The children’s drawing contest on the asphalt also caused a great stir among the city’s residents. Initially, it was planned that about 20 children would take part in the competition, but closer to the competition, it turned out that there are many more talented children in Gorokhov. In addition, it turned out that asphalt is a beautiful “canvas”, there is a place for young artists to turn. That is why the theme of the competition was diverse – from love for his hometown to Euro 2012. Due to the fact that all the works were worthy of victory, the organizing committee of the competition decided not to determine the winners, but to award all participants. The child received sweets and sets of felt-tip pens from APG “Pan Kurchak” and took home a good mood.

The residents of Gorokhiv were also interested in the presentation of the energy-saving program “Warm Home”, which is being implemented by Serhiy Martyniak and “Mr. Kurchak”. The main purpose of the organized presentation was to acquaint the city residents with equipment, materials and alternative fuels that will allow them to be independent of external energy sources. During this event, city residents had the opportunity to see solid fuel boilers from Volyn-Kalvis LLC (Kovel) and TeploEnergoService LLC (Rivne), as well as to get acquainted with samples of alternative energy sources: peat, pellets, heating firewood, etc.

And in the evening on Independence Square the Solemn opening of celebration of the Day of the city took place during which citizens of Gorokhov heard many pleasant words about the city. Zhanna Savchuk, Head of the Gorokhiv District State Administration, Viktor Hodyk, Gorokhiv Mayor, mayors of the past years and many other distinguished guests of the holiday greeted the townspeople. Serhiy Martyniak, a deputy of the Volyn Regional Council, said that Gorokhiv is becoming more beautiful every year, and all the achievements of the city consist of daily work and knowledge. and the talents of its inhabitants. Serhiy Vasyliovych wished the people of Gorokhiv good health, family comfort, so that peace and tranquility reign in every home, and all cherished dreams come true. Mr. Martyniak also noted that like every guest, he came to the holiday not empty-handed and presented the city with a lawn mower and a chainsaw. In turn, the city authorities of Gorokhov thanked Serhiy Martyniak and Agropromgroup “Pan Kurchak” for the attention they pay to the city and presented an ancient symbol of the city – a statuette of the saint.

After the solemn part of the celebration on this day did not subside for a long time, in the central square of the city there were attractions, music was played, mass festivities continued.