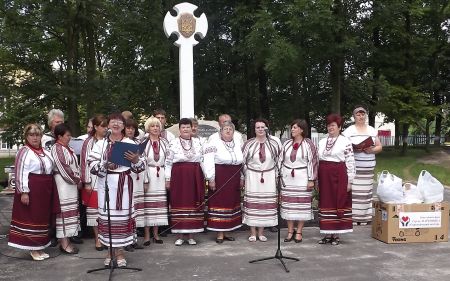 The long-awaited holiday Village Day took place on Saturday, July 14 in the ancient Lukov of the Turiya district. As always, the locals celebrated it with scope, fun and the agro-industrial group “Mr. Kurchak”, which did not stay away from such an important event and actively contributed to its implementation.

The beginning of the holiday was laid in the village square of entertainment and recreation, where at 11:00 a solemn rally began. It is worth noting that a large number of Lukiv residents gathered in the square, because on this day sports and children’s playgrounds were opened here. The honor of opening the holiday was given to Lukivka village head Larysa Tymoschuk, who told how much effort the local authorities and the community make to make the village look modern and European. Then the most active fellow villagers who became the best in the nominations were awarded diplomas and gifts.

Then the floor was given to the President of the Agro-Industrial Group “Mr. Kurchak” Anatoliy Arshulik, who on behalf of the owner of the agro-industrial group Serhiy Martyniak sincerely congratulated all the villagers who were born, grew up and live in this cozy and picturesque corner of Volyn. in the future, peace and love “. Like each guest, Mr. Arshulik came to the holiday not empty-handed and presented the community of the village as a gift of a scythe. there was also a football uniform for the children’s team, and the joy of the local little athletes knew no bounds.

Many pleasant and warm words of gratitude were said during the rally to “Mr. Kurchak” and personally to Serhiy Martyniak from public activists of Lukov and educational institutions located in this settlement, which are actively supported by Serhiy Vasyliovych.

After the solemn rally, the epicenter of the celebrations moved to the village stadium, where there were many interesting and exciting events that day. Locals were very interested in the presentation of the energy-saving program “Warm Home”, implemented by the agro-industrial group “Pan Kurchak” and aimed to acquaint villagers with alternative fuels that will allow them to be independent of external energy sources. Mykola Makivka, the head of the “Warm Home” project, kindly answered all the questions of Lukivka residents regarding the program.

A number of sports events took place on this day. This is a mini-football tournament among children, and a football match between the veterans’ teams and the local sports team, and other equally exciting competitions.

Residents and guests of Lukov were warmly greeted by members of the colorful women’s music group “Quail”, which performed a number of modern songs on folk themes. With their musical compositions, the girls charged a large audience with lower incomparable energy.

The final chord of the day of the village in Lukov was a festive disco, which thundered until the morning.

And the very next day, on Sunday, July 15, the ancient town of Turiisk celebrated its 915th anniversary. In Turiisk and the district there is a significant number of enterprises that are part of the Agro-Industrial Group “Mr. Kurchak”. Serhiy Martyniak, Chairman of Pan Kurchak LLC, was elected a deputy to the Volyn Regional Council from the Turiya district. Given all this, and the fact that “Mr. Kurchak” is a socially responsible company, the management decided not to stay away from such a joyful event and on this day to organize a holiday for the people of Turkey.

The celebration took place in the wonderful summer sunny weather, which gathered in the center of the town, crowded on this occasion, about a thousand of its inhabitants and guests. An open stage was arranged on the central square, there are places for spectators. The presentation of the energy-saving program “Warm Home” attracted the attention of the audience.

The solemn part of the holiday started at about 4 pm, during which Oleksiy Bezsmertnyi, the mayor, and Anatoliy Arshulik, the President of Pan Kurchak LLC, congratulated the audience. The European Vector, which focuses mainly on the development of local communities (through the provision of various grants) and the creation of new jobs in rural areas, including the support of gifted young people, by providing them with grants to study in agricultural universities. program “Way to the future”). It has already become a good tradition for “Mr. Kurchak” to give a valuable gift to the community on holidays. Here and this time, for the settlement authorities the petrol scythe which will be useful to municipal services of the town was presented.

One of the “highlights” of the holiday was decided to make a lottery with a draw of an attractive main prize – a color TV worth about 3000 UAH. Probably, that is why all 1000 lottery tickets (worth 5 hryvnias) quickly sold out. Many prizes were drawn during the lottery – a coffee grinder, a microwave oven, a juicer, a variety of utensils and much more. And the main prize on TV was won by a young resident of Turiyska Iryna, who after announcing the lucky number of the lottery ticket, could not believe in her happiness for a long time.