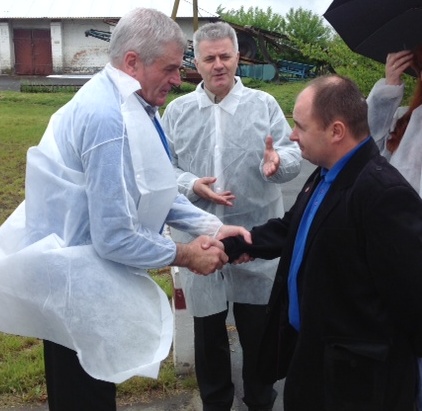 Representatives of the German delegation of the Waldeck Frankenberg convoy group, which were in Volyn from May 10 to 15 this year. and cooperate with Ukrainian partners – Serhiy Martyniak Volyn Charitable Foundation “European Vector”, visited the Turian feed mill LLC “Agrotechnics” APG “Mr. Kurchak”.

During the visit, the head of the delegation Wilfried Vogel was pleasantly surprised by the level of the plant, which, according to him, is European-style. “I have met similar plants in Germany many times and I can say that your plant is not inferior,” – said the guest.

By the way, during the last four years, in May, German philanthropists come to Ukraine to personally see the demand for humanitarian goods, which are actively developing educational and medical institutions in Volyn.

This year, a delegation of 11 people led by Wilfried Vogel visited Turiysk and Rozhysche district hospitals, where they got acquainted with the work of departments where repairs were carried out and furniture was partially purchased at the expense of the Serhiy Martyniak European Vector Charitable Foundation.

In the Gorokhiv district, philanthropists had the opportunity to visit the Peter and Paul Church in the village of Halychany, which was rebuilt after the fire by MP Serhiy Martyniak. In the village school of the village of Brany, the German guests were gladly welcomed by schoolchildren and teachers, thanked for the comfortable school furniture, and a festive program with songs and dances was prepared.

At the same time, the director of the Waldeck Frankenberg Convoy Group Wilfried Vogel, the head of the European Vector VOBF Halyna Vedrych and the assistant of the People’s Deputy Serhiy Martyniak Oleksandr Piza gave a final press conference for the journalists of the regional center.

According to Halyna Vedrych, German philanthropists are satisfied with the systematic and fruitful cooperation in Volyn, so we can hope for further joint charitable work to improve conditions in educational and medical institutions in the region.