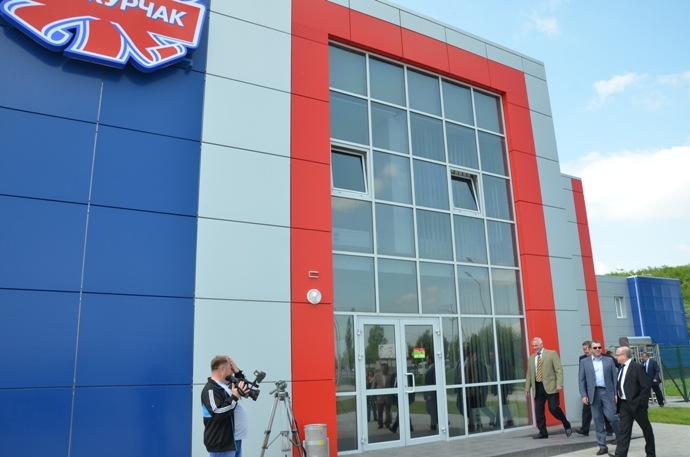 The head of the Volyn regional administration Volodymyr Gunchik got acquainted with the work of the newly-opened workshop of slaughtering and processing poultry TzOV “Ptakhokompleks” Gubin “and the meat-packing plant TzOV” VMP “, which is included in the APG. Insult of the enterprise roztashovany near Novovolinska. So, as a result of the robot, having learned and the head of the world Viktor Sapozhnikov. Ninety ci enterprises will get 650 employees working with a robot and they can rally to the budgets in the best possible way. So, for example, depriving the TzOV “VMP” shomyisyatsya pererakhovuє to the budget of Novovolinska milyon two hundred thousand hryvnia. Timing an hour from the view of the new slaughterhouse, the production of TzOV “Ptakhokompleks” Gubin “has grown to the budget budget. And tse, at my own devil, vikonannya social programs, dobrobut mіtssevіh inhabitants, development of the territory. Zagalom from 2014, the APG “Pan Kurchak” paid the budgetary fees of 74 million UAH 400 thousand hryvnias before the budget.

Similarly, the oblast workers of that place were looking for the founders of the Pan Kurchak Agroindustrial Group in Sergiyev Martynyak, and even more of such enterprises, out of a closed cycle of virobnastics (victorious men’s materials in this region’s life, the future’s head That dodav, who on Volina agronomical є priority. Also, for 60 hours of development of the region, lie the very agricultural sector. Volodymyr Gunchyk also respected that the Mistseva Vlada was oblivious at once from the people’s deputies from Volin, Zokrem, Sergiym Martynyak, to work over the stems of the laborious industrial park, moreover, the Volyn registers, who demand.

Timing for an hour on the New Year’s New Testing Shop for slaughtering and reprocessing birds for the start-up and juvenile robots on the project to pull 50 thousand heads of birds for a change, the patron of the director of the TzOV “Ptakhokompleks” Gubin “Volodymyr Lvov. The managers of the enterprise open the plan for the increase in efficiency. Until then, the technological process itself has been perfected, and even here there is no more possession of the provincial Polish virobnik, the assortment has been expanded, the sprout has grown, the types of packaged cold chicken have become larger. As a result of the commissioning of a new plant for processing poultry, the production of robs becomes more than 35,000 tons of finished products, which is 70% more in 2014.

Chicken is lived on this season in 11 regions of Ukraine, as well as outside the cordon. Zokrema, products are already supplied from Moldova, Kyrgyzstan, Virmenia, I am preparing the first party for Uzbekistan.

The enterprise has a system for the management of safe food products, which is in accordance with the international standards ISO 22000: 2005 (for export to the EU). Loose complex with certification “Halal” (for export to the Muslim land).

Natomist at the Novovolinsky meat-packing plant (TzOV “VMP”) is a three-step reconstruction and modernization of the cowbass shop with pre-production. More than 61 million hryvnias have been invested, of which 26 million hryvnias were invested for the possession of provincial Polish and German companies. As a result, there will be an increase in the efforts of the enterprise, the sprout, if they produce 45-50 tons of products here, then, for the reconstruction and modernization, they will produce 80 tons.

On the seasonal TzOV “VMP” – one of the provincial cowboys and meat viruses on the Ukrainian market. The plant is highly efficient due to the high quality of food production, which is extremely rich in meat, which meets all European standards. The assortment range of products to become more than 100 names. Infectious is the number of commercial mortgages in Ukraine, in which the products of the enterprise are presented, the number of which is 5 thousand. TzOV “VMP” sells ready-made products under the trademarks “Volinprodukt”, “Volinska” and “Ukrainian Pork”.